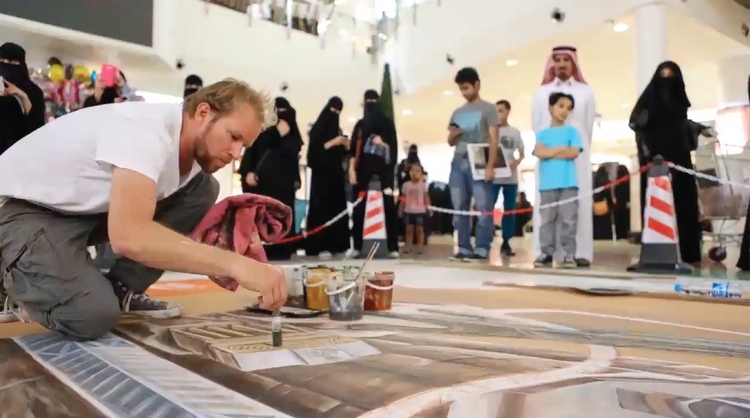 EMS is part of an international chain (UPU) known in Saudi Arabia under the name of Albareed AlMumtaz and it is supported by the official Saudi Postal.

In 2012, Al Bareed al momtaz launched “Mobtaath” service, which targeted the students abroad in UK, USA, France, Germany and Australia. The launch of the service was followed by an online campaign claiming, “ Delivering what you love, to the people you love”.  The campaign was successful yet most of the target audience still thinks of “Albareed AlMumtaz” as a local mailing service which serves only in Saudi Arabia.

A bolder follow up campaign was required to the “Mobtaath” launch, which would also be engaging enough for the online community. The much-anticipated campaign also needed to reach out to the new consumer introducing some real-time trial.

During the holy month of Ramadan, when malls are crowded with visitors, we assigned the international artist Leon Keer to make a 3D art illusion for the first time in Saudi Arabia, showing the service destinations landmarks linked all together with a conveyor belt. The landmarks appeared on a 95 square meter 3D poster of “Albareed AlMumtaz” shipping box. Also a mobile application was created whereby after scanning the QR code placed on the poster, 3D Box appeared and started moving on the conveyor belt in between the landmarks showing the delivery process to our destinations, then consumers could share this and win free shipping coupons.

On the last Day, so as to engage our online audience, we seeded a viral teaser video of “Albareed AlMumtaz“ mascot called “The Fast”. Within 24 hours, the video had received over 65,000 views and generated huge social interaction. Two days later, we released the full-length version, which directed consumers to the Facebook micro site where they had to play a game searching for “The Fast” and win a prize.

As a result, the news about the action was released in more than 100 media channel mentioning in social networks, more than 7000 times and reached far beyond our expectations. During this period of the activation, the traffic on the social media channels of “Albareed AlMumtaz” doubled, most importantly the consumers are now aware of “Mobtaah” service and are using it.